First thing first, we are Christians, we believe the basic and earliest confession of faith that, “Jesus is Lord”.

We are all ages, local families and people from all over the country and world. We love our Sunday school for all ages, Children’s Chapel, nursery, choir, outreach, fellowship, prayer, and wonderful parish meals. We love music and all the colors of the Christian year. 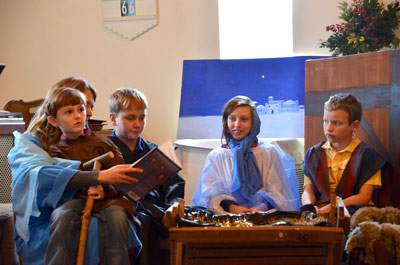 Saint Peter’s is also an Episcopal Church, we are part of the ancient faith tradition of the Church of England, and are part of that ongoing living tradition of the world wide Anglican Communion of Churches, the third largest body of Christians in the world. We are committed to doing the hard work that makes such an extended family possible and we avoid the temptations of divisiveness that plague so much contemporary Christianity.

Saint Peter’s-in-the-Mountains began in 1915. We are a parish in the Episcopal Diocese of Southwestern Virginia. Our community life revolves around the Sunday morning worship of God. Our liturgy is traditional (Rite II) and lively. We put flesh and skin onto the ancient old bones of classical Christianity and we do so with joy and beauty.

We have a long and generous tradition of community involvement, and in particular with the Phoebe Needles Center and Ferrum College.

We celebrate and observe the classical creeds and sacraments of Christianity, specifically the Apostle’s Creed and the Nicene Creed. We believe the writings of the Old and New Testaments to be God’s word. We are Trinitarian and Christ centered. We believe Jesus Christ to be fully human and fully divine. We believe in the atoning sacrifice and resurrection of Christ that is setting the world free from the powers of sin and death. We believe the atonement to be a big atonement for all, not for the few. We believe the Good News is Good News for all people all the time, not just for some people some of the time.

If you would like to know more about what Christians believe, take a look at The Outline of the Faith and the Baptismal Covenant.